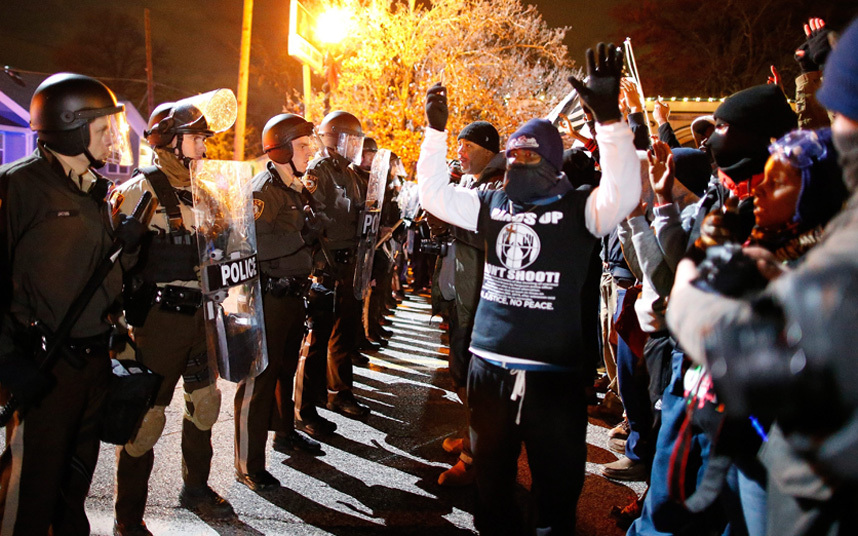 OP-ED: What is the Role of Psychiatry After Ferguson | Somatosphere

In Mental Illness and Mental Health, Op-Eds, Race
By Tamika Franklin
Share on FacebookShare on TwitterShare on Linkedin

What role should mental health care professionals play in helping heal psychical wounds exposed in the aftermath of Ferguson and New York?

This question lies at the heart of calls that emerged from within psychiatry, psychology, social work, and other mental health professions over the weeks since grand jury deliberations ended, and protests began, in cities across the country. Professional organizations such as the American Psychological Association convened panels to address the “psychology of improving police-community relations.” The National Association of Social Workers urged “its members and the wider social work community” to become more involved in social justice issues. And individual psychiatrists, psychologists, social workers, and other mental-health professionals developed methods for identifying and treating post-traumatic symptoms that arose as a result of protests and violence in communities of color.

Such mental health mobilization makes sense on many levels. Protesters, their families, and often their communities remain traumatized by the specter of unwarranted state violence, and by a system that seemingly condones it. And indeed, voices from within minority communities have called for the types of help that mental health practitioners offer. “We are upset, we are hurting,” a spokesman for the groups Hands Up United and Organization for Black Struggle explained during the Ferguson protests. “They don’t send psychiatrist[s], they don’t send counselors. They send more National Guard.” Meanwhile, St. Louis alderman Antonio French asked Missouri Governor Jay Nixon to send “400…mental-health professionals to Ferguson to help residents deal with trauma, anxiety, and fear.”

Yet even while there is a clear need for healing, history provides an important caveat that mental health communities would do well to keep in mind. In times of racial political crisis, mental health rubrics have in the past been used to locate social “pathologies” in the minds of oppressed persons, while bolstering the very power structures that their protests fight against.

Consider the psychiatric response to the protests during the civil rights era of the 1960s and 1970s. A number of psychiatrists aligned with calls for racial justice and equality, decried the lack of “racial integration,” and critiqued how “white norms” produced psychological oppression. And the profession itselfbegan its first slow steps toward training and hiring more black psychiatrists and psychologists.

During the same era, however, under the guise of “treating” mental anguish in African American populations, a number of high-profile research articles in psychiatric journals blatantly defined civil rights participation as a form of mental illness—or worse, depicted racial protest as a form of psychosis that produced anxiety…in whites.

The best known practitioners of this approach were psychiatrists Walter Bromberg and Frank Simon, who, in the aftermath protests in Detroit, Newark, and Los Angeles, wrote articles in the Archives of General Psychiatrythat detailed how black anger was fuelled by a “protest psychosis”—a condition in which the rhetoric of the Black Power movement drove “Negro men” to forms of insanity (“…the stress of asserting civil rights in the United States these past ten years and the corresponding nationalistic fervor of Afro-American nations during the same time period has stimulated specific reactive psychoses in American Negroes”) marked by anger, hostility, and acts that Bromberg and Simon shockingly called “racial antagonism of the Negroes to the Caucasian group.”

[x_pullquote cite=”Jonathan Metzl” type=”left”]The contention that participation in civil rights protests caused violent schizophrenic symptoms in “Negro populations” in ways that threatened “white” civilization appeared in any number of other articles in the 1960s and 1970s.[/x_pullquote]

In an article titled “Six Years of Sit-Ins: Psychodynamic Causes and Effects” in the International Journal of Social Psychiatry, Pierce and West argued that “Negroes developed…dangerous aggressive feelings” when they participated in civil rights sit-ins. Raskin, Crook, and Herman wrote in theJournal of Consulting & Clinical Psychology that “blacks” with schizophrenia rated higher than “whites” on a set of “hostility variables” due to delusional beliefs that “their civil rights were being compromised or violated.” And in a series of high-profile articles in Psychiatry: Journal for the Study of Interpersonal Processes, Brody linked “social conflict” with “schizophrenic types of behavior” in “young adult Negro males.”

Relatedly, as by now has been well-publicized, antipsychotic medication advertisements in these same journals used discriminatory language and iconography to pathologize angry black men protesting in urban streets.

What do we learn from these egregious examples from the not-so-distant past? To be sure, mental health professions—such as my own field of psychiatry—no longer tolerate the racism that lay not far beneath the surface of psychiatric assumptions in the 1960s, and indeed, a number of professional organizations now respectfully address minority mental health.

Ultimately however, the caveat provided by the past is not, simply, that mental health professionals need to be aware of their own overt biases when attempting to intervene in moments of heightened racial tension. The lesson is also that the frameworks that led potentially well-intentioned practitioners to racist assumptions did so because they misidentified the subject of psychiatry’s diagnostic gaze. Psychiatrists and other mental health practitioners in the 1960s implicitly assumed that their diagnostic machinery was put to best use diagnosing black protesters or the black “cultures” from which they emerged. After all, the overt “symptoms” of protesters likely seemed the most disruptive or insane to their own psyches and to society more broadly—who else but “crazy” people would burn down the very cities in which they lived?

Mental health professions in the civil rights era thereby misdiagnosedstructural problems as psychological ones. Under the guise of empathy and care, psychiatry, psychology, and other mental health rubrics thus (and often unknowingly) bolstered the very oppression they aimed to treat. And the symptoms of “patients” ultimately represented the stereotypes, biases, and blind assumptions of “doctors” instead.

Thankfully, early signs suggest that the healing professions may have learned from past mistakes as clinical networks mobilize after the decisions in Ferguson and Ney York. For instance, the National Association of Social Workers statement in the aftermath of the Ferguson made no attempt whatsoever to diagnose (or diagnostically empathize with) protesters, but instead argued for “national standards on the use of lethal police force” and “national standards on how police handle persons living with mental illnesses or disabilities.” And, learning from our youth, growing numbers of medical students organized under the hashtag #whitecoats4blacklives to stage die-ins, hands-up protests, and other actions in medical centers across the U.S. These medical-student interventions self-reflexively focus medicine’s diagnostic gaze, not just on black lives, but on the political actions, biases, and silences of “white coats.”

These and other nascent interventions suggest the possibility of a new politics of mental health, and medicine more broadly, in the aftermath of Ferguson. In this new reality, psychiatrists, psychologists, and social workers continue to empathically treat psychological distress. But they also recognize ways that the very health systems of which they are a part can contribute to disparity and inequality. By so doing, mental-health practitioners can then use their socially sanctioned political platforms to speak with empathic authority about broader, psychologically pathogenic structures, networks, and economic systems that produce and sustain injustice in the present-day United States.

Read ” Psychiatry After Ferguson” on Somatosphere