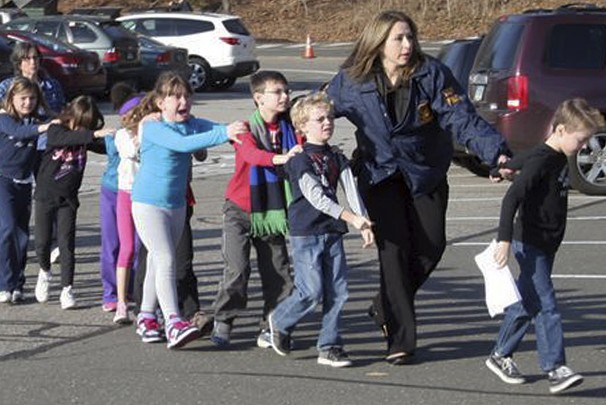 VIDEO: US schools are taking matters into their own hands to protect their students from shootings | ABC

In Guns, Guns and Violence in America, Mass Shootings, Mental Illness and Mental Health, Videos
By Tamika Franklin
Share on FacebookShare on TwitterShare on Linkedin

Transcript
LEIGH SALES, PRESENTER: Another school massacre last month in the United States focused attention once again on the issue of gun control. President Barack Obama pricked the conscience of the nation, and once again, the rallying cry of the gun defenders was the right to bear arms. But in a now very familiar pattern, in between these all-too-frequent tragedies, the debate dies away, and as North American correspondent Ben Knight reports, schools are fending for themselves, assuming things will never change.

BEN KNIGHT, REPORTER: In the American Midwest, the school day starts early. You’ve never heard 2,000 teenagers so quiet. Here at Mentor High on the outskirts of Cleveland, there are no metal detectors in the doorways. Yet it was a school like this one, just 20 minutes down the road, that in 2012 became another victim of this country’s tragic epidemic.

NEWSREADER: The terror began early this morning in a normally quiet suburb of Cleveland. Kids were settling in for breakfast around 7.30 this morning when a boy stood up and started shooting.

BEN KNIGHT: It was just three years ago, but so common have school shootings become here in the US that Chardon is all but forgotten. Not here of course.

MATT MILLER, SUPERINTENDENT, MENTOR SCHOOL DISTRICT: It really, really shook us pretty hard. Since something like Chardon hit so close to home, we deal with safety procedures almost every single day.

BEN KNIGHT: That means lockdown drills preparing for an active shooter inside the school.

SCHOOL OFFICIAL: The door is most likely gonna be locked to save time in the event of a situation like this.

BEN KNIGHT: So the door will be locked so a shooter can’t just walk in?

BEN KNIGHT: But then you’re gonna do something which buys even more time?

BEN KNIGHT: This school has installed a special device to barricade students inside the classroom.

BEN KNIGHT: What’s to stop someone from shooting that out and reaching down and pulling out the pin?

SCHOOL OFFICIAL: Well, obviously, with this being glass, it is not foolproof. What we’re trying to do is buy our students and staff as much time as possible.

BEN KNIGHT: There are a few products like this on the market. This one’s called the Bearikade .It’s not in destructible, but it will withstand an enormous amount of fire-power.

With gun reform gridlocked in Washington, schools are taking their security into their own hands.

MATT MILLER: We’ve had a lot of school shootings in the United States. They’re not slowing down and they’re not stopping and so we have to take measures on our side to combat that in case something would happen and it would be a tragic event.

BEN KNIGHT: It’s not hard to understand why a school like Mentor doesn’t wait for someone else to solve the problem. Every week on average there is a shooting incident at an American school. And it’s not as though there isn’t a debate going on, there is, but that debate is perhaps the gun lobby’s greatest victory of all, managing to frame it so that somehow it’s not guns that are the problem.

BEN KNIGHT: President Barack Obama has been making a new push for gun control in America.

BARACK OBAMA, US PRESIDENT: About 400,000 Americans have been shot and killed by guns since 9/11. 400,000. And I refuse to accept the notion that we couldn’t have prevented some of those murders, some of those suicides, kept more families home, protected more officers if we had passed some common sense laws.

BEN KNIGHT: His potential successor, Hillary Clinton, is also campaigning on gun control. But they’re arguing in a vacuum. The debate in the United States has shifted, so much so that on the conservative side, gun laws aren’t even the issue any more.

JEB BUSH, US REPUBLICAN PRESIDENTIAL CANDIDATE: We have a mental health challenge.

BEN CARSON, US REPUBLICAN PRESIDENTIAL CANDIDATE: In a number in of these cases, these people have already been working with mental health professionals, but nothing was done about it.

DONALD TRUMP, US REPUBLICAN PRESIDENTIAL CANDIDATE: Guns, no guns, it doesn’t matter. If you have people that are mentally ill and they’re gonna come through the cracks.

BEN KNIGHT: On the face of it, it makes sense. Who else but a madman would commit the mass slaughter of innocents?

MARY ELLEN O’TOOLE: If you take all of these mission-oriented shooters over the last 10 years, each one of them had a different mental health issue. My fear is that at some point, people are going to start saying, “Well, let’s look at all the paranoid schizophrenic individuals. Let’s look for all the depressed people. Let’s look for all the people that have maybe had a diagnosis of Asperger’s.” So which one are we gonna lock up?

BEN KNIGHT: In fact people with a severe mental illness are extremely unlikely to commit an act of violence. They’re far more likely to be victims.

JONATHAN METZL, PROF. OF PSYCHIATRY, VANDERBILT UNI.: It’s not the case people diagnosed with schizophrenia are just gonna run and attack people. Past history of alcohol use or current alcohol use, past history of violence, access to firearms, lack of firearm training – these are all factors that if we address them, we’d severely curtail the number of shooting deaths that we have in the United States.

BEN KNIGHT: The biggest one of course being the presence of firearms.

JONATHAN METZL: Yeah. No, it’s very hard to commit a shooting if you don’t have a gun.

BEN KNIGHT: Some American states have already passed laws that require mental health professionals to report dangerous patients to police who can then confiscate weapons. But the Sandy Hook shooter got his guns from his mother. The Oregon shooter bought all of his legally. What they had in common was not a specific mental illness, but a hatred of the world.

MARY ELLEN O’TOOLE: They blame the world for everything. They blame the world for their lot in life. They blame other people because they don’t – they’re not part of a group. Things are hopeless, it’s not gonna get any better and it’s all of your fault. It develops over years. There are warning behaviours and so the mental health system would play a role in this, but it has to go back when they’re little boys. We do feel that intervention is possible, but not when they’re 18, 19 and 20 – too late.

BEN KNIGHT: And too late for the 20 people killed already this year at American campuses, to say nothing of the wounded and the traumatised. The mental health argument is important, but it’s become a way of avoiding the impossible challenge of getting high-powered, military-grade murder weapons out of American society. So instead, it’s left to the teachers and the administrators to protect the nation’s children.

MATT MILLER: There is some train of thought that says, “You’re gonna have a bad day. It might not be on a really high level, but you have to be prepared for it and practice it.” There in the Cold War, it was always, “Stop, drop and roll,” and practice nuclear fallout and things like that. Obviously we’re not there anymore, but we unfortunately evolved to even, in some ways, a more dangerous place.