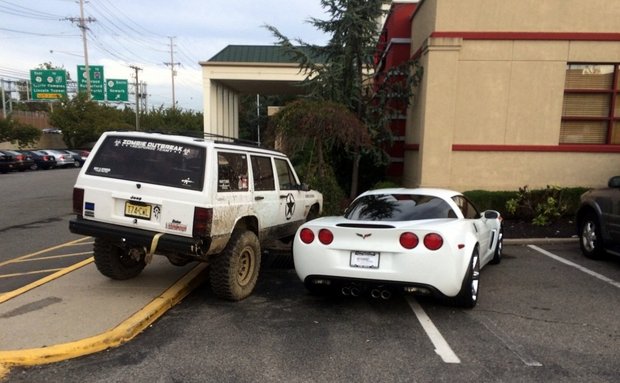 OP-ED: When a parking dispute is also a hate crime | MSNBC

In Guns, Guns and Violence in America, Op-Eds, Race
By Tamika Franklin
Share on FacebookShare on TwitterShare on Linkedin

They said it was a parking dispute, an everyday interaction between neighbors.  That the exchange emerged from charged tensions of the banal.  That the alleged assailant, Craig Stephen Hicks, belonged to no organized bias groups, and showed disdain for all people, equally.  As that such, the lethal interaction could not have been driven by prejudice or hate.

Thus claimed the Chapel Hill, North Carolina police department, whose initial investigation into the triple homicide of three Muslim-American students, Deah Shaddy Barakat, Yusor Mohammad Abu-Salha, and Razan Mohammad Abu-Salha, erroneously suggested “that the crime was motivated by an ongoing neighbor dispute over parking” at the apartment complex in which they lived.  Hicks’s wife, Karen, claimed the same, telling reporters that “I can say with absolute belief that this incident had nothing to do with religion or the victims’ faith, but it was related to a longstanding parking dispute.”

No one yet knows what happened.  The question of whether Hicks’s actions met criteria for a hate crime lies at the core of the FBI inquiry into the shooting, and divides investigators who have called the triple murder an “isolated incident” from members of the Muslim-American community who place it in the larger context of Islamphobia and threats of violence from anti-Muslim groups.

Yet regardless of whether the North Carolina shooting is categorized as such, the immediate response to it illustrates a larger reality: when shooters are white, we as a society have an exceedingly difficult time ascribing political or racial motivations to their actions.  This dynamic is often acutely seen in the aftermath of high-profile mass-shootings.  Horrific crimes such as Newtown or Aurora would almost certainly be labeled as terrorism were they perpetuated by members of racial, ethnic, or religious minority groups.  Our research shows, however, that when mass-killers are white, mainstream U.S. discourse goes to great length to define the crimes as isolated incidents that result from the actions of wayward individuals, or individually disturbed brains, rather than resulting from larger, communal etiologies.

A similar dynamic seems to have initially played out in North Carolina.  Here, reports of a lone, isolated incident are troubled by the crime’s uneasy resonance with larger tensions of race and racism.

For instance, the notion that the shooting was not motivated by hate but instead represented an everyday dispute profoundly overlooks how everyday interactions are often imbued with racial tensions.  Scholars define this everyday racism as manifest through subtle and often unconscious exchanges: ignoring persons of color, ridiculing them, or treating them differently.  Poets such as Claudia Rankine have been known to recognize the effects of this everyday racism –a tool she describes as deployed by “white people” to make others feel “uncomfortable in the grey areas” of life—while walking through parking lots.  Because it is harder to identify or address, such discrimination potentially renders commonplace interactions as even-more-pernicious vectors of bias than are overt forms of racism such as expressly racist language or beliefs.  When read through this lens, parking disputes can be understood as both isolated interactions and as metonyms for larger forms of categorical discrimination.

Early reports also suggest that Hicks exhibited an increasingly prevalent form of stand-your-groundmasculinity.  New York Times reports described Hicks as a “self-appointed watchman” in the apartment complex who patrolled hallways and parking lots, where he monitored noise levels and checked whether cars showed the appropriate parking stickers.  These actions went hand-in-hand with a complex psychological relationship to guns marked by  disproportionate gun ownership (authorities uncovered an arsenal of over a dozen firearms in Hicks’s apartment, including handguns, shotguns, rifles and a Bushmaster AR-15) and by the symbolic centrality of guns to this particular iteration of manhood (Hicks pointed to his holstered gun during altercations, and posted a Facebook image of a gun on a scale with the words, “Yes, that is 1 pound 5.1 ounces for my loaded 38 revolver”).

This performance of masculinity often claims to defend the freedoms of selves and others.  But increasingly, as it parades through Walmarts and burrito restaurants, it foments racial bias in gun-toters, and fear and inquietude in the very citizens that the guns are ostensibly supposed to protect.

None of this necessarily suggests that the North Carolina shooting will be designated a hate crime.  And in any case, the state adds no extra penalties to first degree murder charges when they are categorized in this way.

But even if it is not designated a hate crime, the vigilante shooting of three unarmed students appears deeply connected to the larger politics of hate.  Contextualizing it as such forces us to consider how gun crimes like the one in North Carolina are rife with racial tensions that tell us a great deal, not just victims, but victimizers as well.  And, how forms of hate or bias are much harder to recognize when they illuminate, not marginalized others or outsiders, but the attitudes, hostilities, and blind assumptions of the mainstream.

Read “When a Parking Dispute is Also a Crime of Hate”, originally posted on MSNBC.

View related video “How do We Define Hate” on Melissa Harris Perry 2.14.15.